A late night post to share with you the first two nationalist artillery and the previous battalion bases completed. 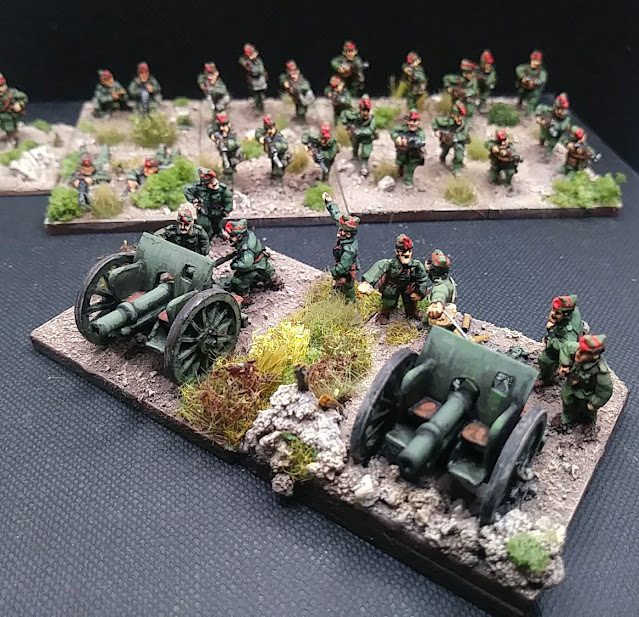 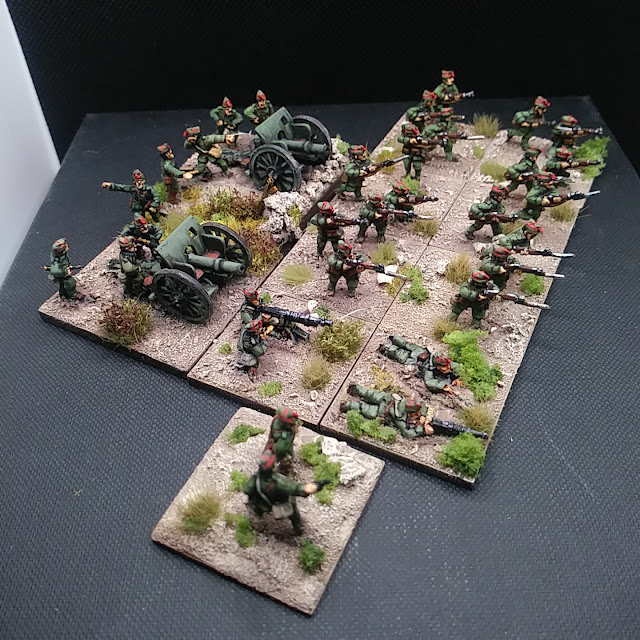 Today some WIP pictures. Taking advantage of the "élan" given by the rules "For Whom the Dice Rolls" I started to work on several artillery bases for the Nationalist side:  Two Krupp field guns and one antitank Pak 36 gun.

The bases sizes are: 3x4 cm for the antitank gun with a crew of three and 4x4 cm for the field guns with a crew of four.  Figures and guns are all but one from Peter Pig.  The crewman of the Krupp with greenstuff is from the Old Glory Russo-Japanese War range. 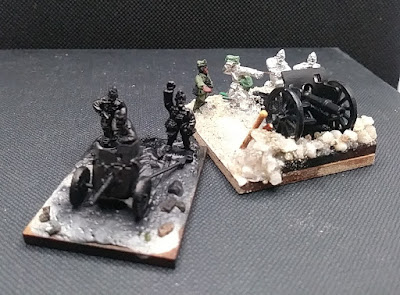 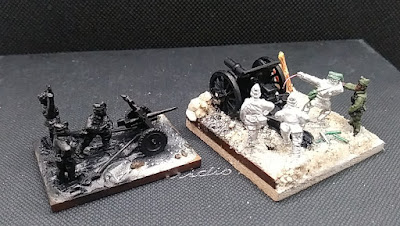 First unit for "Whom the dice rolls"

I received today my copy of Trebian's rules "For Whom the dice rolls" I didn't have  time to read it but it spurs me to finish the first unit a Nationalist infantry battalion, who , as per the rules is a total of 24 miniatures: 3 infantry companies, 1 machine-gun company and a command.  The miniatures needs a coat of varnish ( gloss and matt ) and I have to finish the bases. But essentially their table ready ... almost.

In the next days I will share more 15mm goodies, SCW and other periods and a few books about the Spanish Civil War. 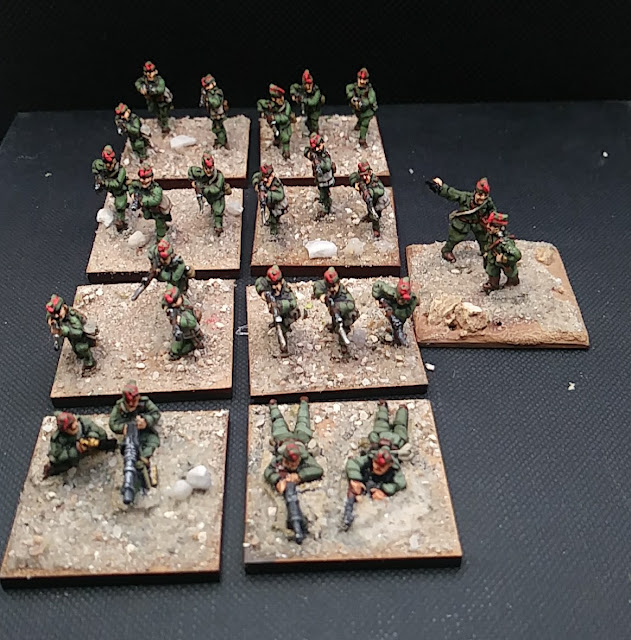 Following the previous post, more pictures of the SCW painted stuff. Except the panzers I painted last summer the rest have been painted probably more than nine  years ago. As told in the last post I really enjoyed trying to represent the Spanish countryside type of terrain, bushes , rocks, etc . Now the dilema, I just bought For Whom The Dice Rolls , I expect the rules to be a drive to give a push and a focus to paint the rest of the 15 SCW lead pile. The question is: the rules suggest to use 3x3cm base and 3 figures per bases for infantry bases. Should I debased what I've done already?  Dilema  .... Thanks for watching 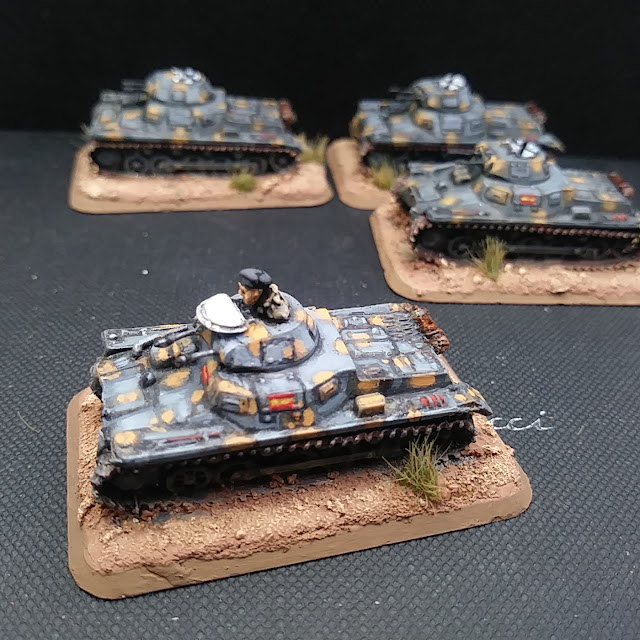 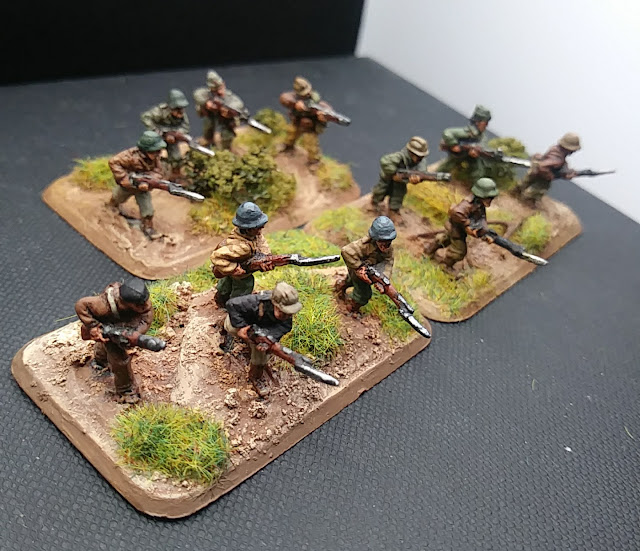 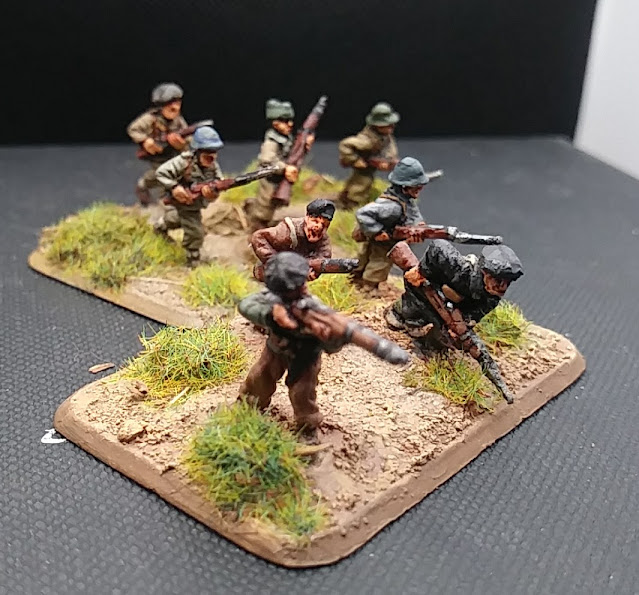 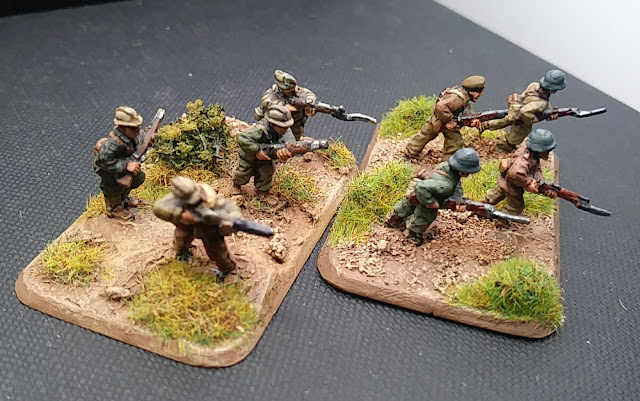 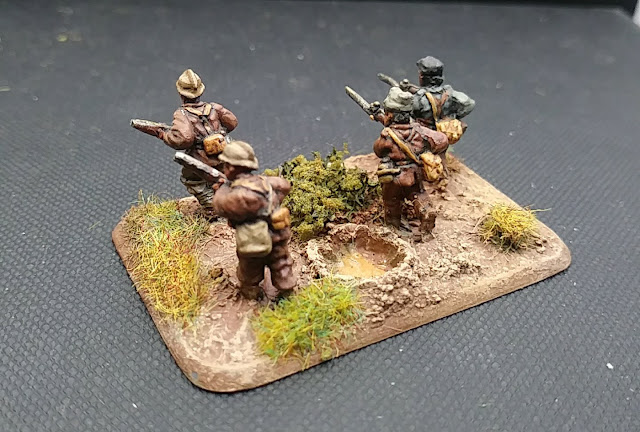 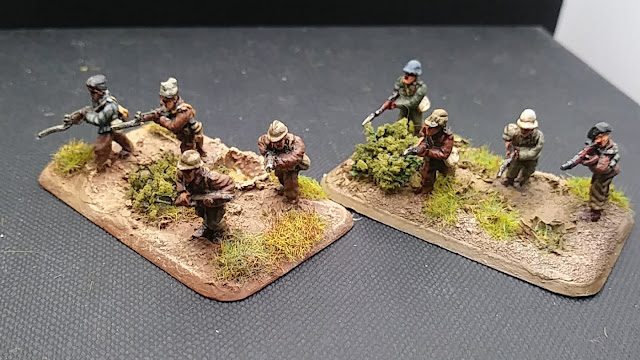 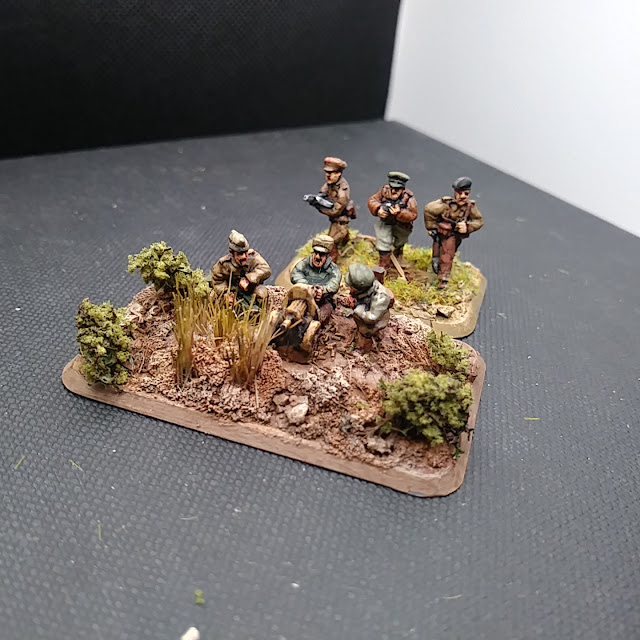 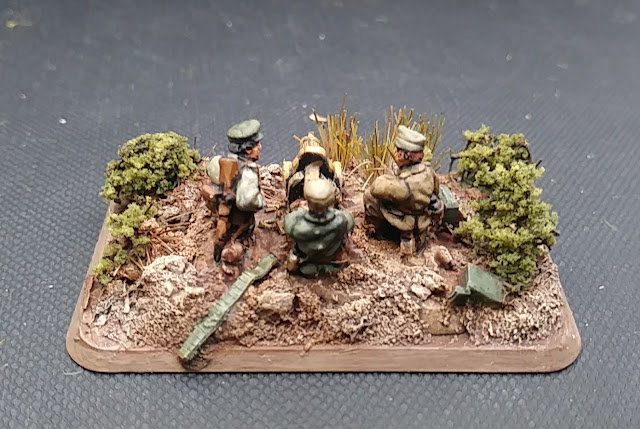 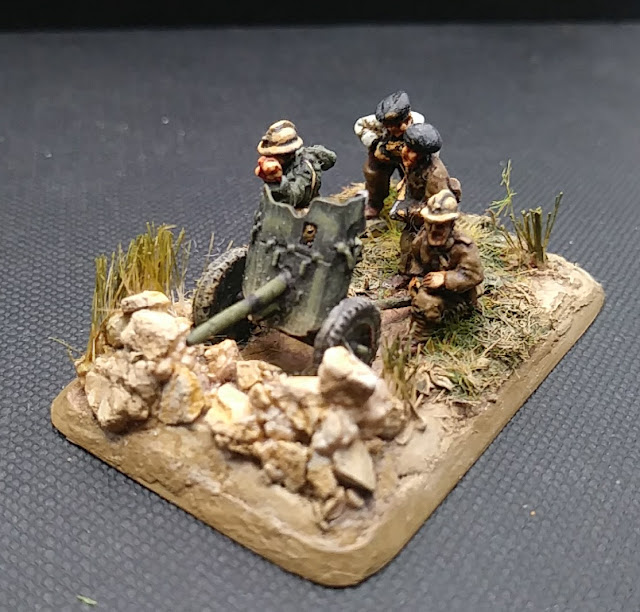 Keeping on with the task of recording the progress of my work and a to have a picture record of the collections and projects this time I will share with you some the oldest stuff.

The Spanish Civil War for different reasons (mainly familial) have always fascinated me. Along the years I collected miniatures in different scales 1/72, 20mm, 1/32, even 6mm and finally 15mm. The Peter Pig range was a great surprise and a way to put on the table higher levels units and enjoying the painting. I quickly hoarded a lot of miniatures including Old Glory, Flames of War, to field both sides.

Those miniatures where already shown many years ago in my first wargaming blog. I really enjoyed working out the bases.

During may 2020 I've got the short lived idea to paint the amassed pile of shame by theme or project, trying to focus in achieving something. I decided to start with my Boxer Revolt in 1/72 one of my oldest project in that scale, I started to paint the Orin Boxer set like 12 years ago maybe more. I remember trying new painting tricks, transforming Airfix WW1 Us Infantry into marines, buying littles Buddha statues in Chinese bazars etc... but of course the project staled and stopped, the boxers boxed started a long sleep...Until the last year, when I decided to at last paint the Boxers.

The Orion set was at the time and still is , a great set. not only the quality of the sculpting, the variety of poses and troop types but simply by is mere existence! 20 years ago I wouldn't imagine that a Boxer Rebellion box of plastic miniatures could even exist.

One of the consequences of retaking the 55 days in Beijing or Tsientsin  project was to discover this great blog Just need varnish with great posts on the topic and to buy Diana Preston's "The Boxer Rebellion" book to go a bit further of the Ospreys.

Hello everybody, second post of the A wash a Bourbon comeback serie! It's time to a smaller scale to show up !!
ACW in 1/72
Union infantry from Hat: 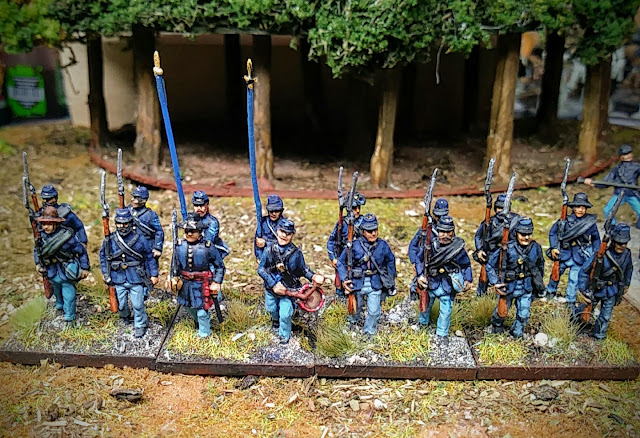 Ok it's not crispiest set in the market but God! Thanks Hat for providing us an ACW set in 1/72 with drill poses. Details are great and overall accurate ( Period specialists will probably find issues but for me they fit the bill) Even with identical poses, little differences here and there in the clothes give some lively feel to a whole unit.
Having already a huge lead pile of 15mm for the ACW, when I saw the miniatures in the flesh and you know how will finish the sentence... I couldn't resist.
If you want to start an American Civil War project on the cheap with cool minis Hat is  the way to start. I only hope that this release is a success so the range will expand. 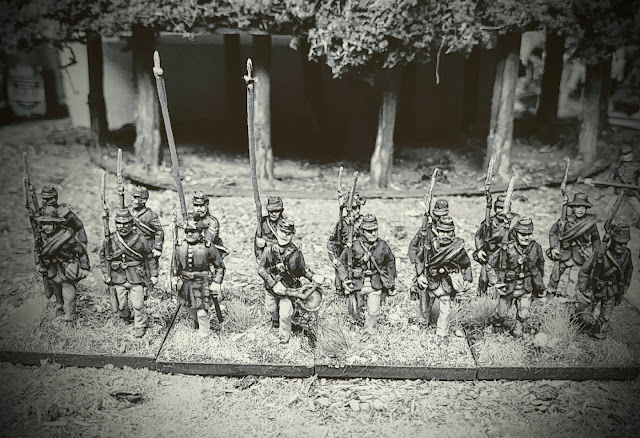 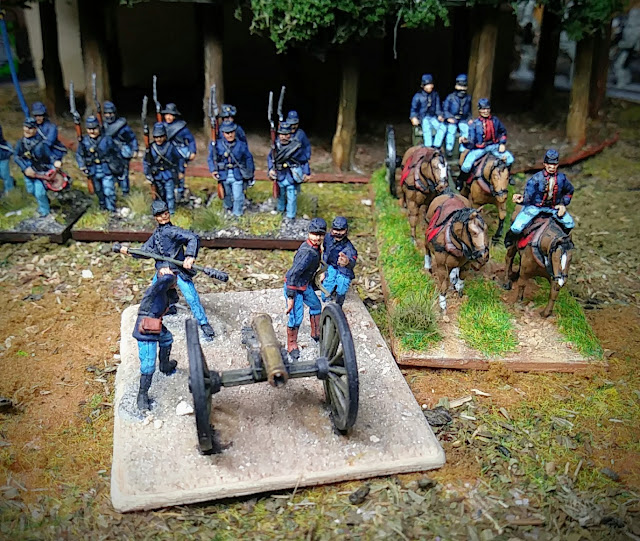 Originally bought as a proxy for 1870 french artillery when I thought to start something "Franco-Prussian War in 1/72 " with the Emhar sets many moons ago. I finally decide two or three years ago to paint as its original purpose. This set (originally from Imex I think) show is age and the virtues and faults of the original brand. Dynamic poses for the artillerymen, a slender anatomy, the gun itself got the minimal necessary details so it's fast and easy to build and paint ( mental note: artillery is never easy to paint..) . The limber... on the other hand.. is less good, stiff and unnatural poses for the riders, the horses are closer to big mules and the limber is really bare, too minimal. But once again it's 1/72 plastic ACW artillery set with limber weren't available easily in the shops at that time (Italeri didn't made yet their reissues).  So it was a more than welcoming addition to an ACW or - it was a FPW- project .
Hat Napoleonic Spanish line infantry 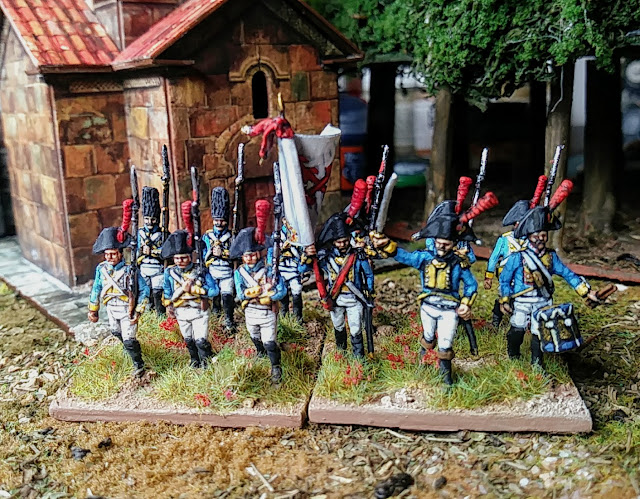 At last our prays where heard!!! A decent set depicting one the most relentless Napoleon foe, the Spanish army in 1808- 1809. Hat released a few years ago four sets line, light infantry and grenadiers and an infantry command box. overall it was a nice, smart and a more than welcome move from the miniature company. Their previous effort with the Napoleonic Spanish was the guerilla and let's say that it was a more than uneven product, mildly saying.
The miniature are really nice to paint with enough details to ease your brush work, not to much mold lines. Those are great miniatures like the ACW series and a companion to the Emhar set.
This battalion is based for the Bataille Empire ruleset and belong to a commission from my friends of Ars Bellica.

3 years doing what? The first posts of the "A Wash of bourbon" come back will share with you what I paint in the last 36 months. Expect a chaos of scales, projects, all mingled and presented in no particular order.

With no further ado: 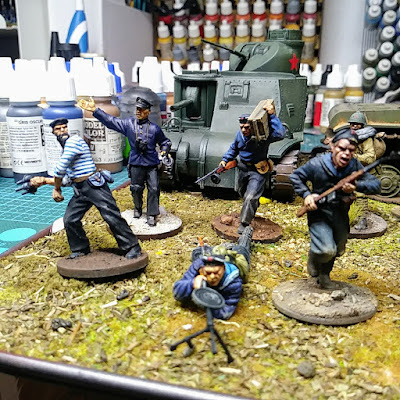 Zvezda soviet sailors, I buy it quite discounted as it was an old box "gathering dust" in a shop - always scout your local retailers sometimes bargain and gems are hidden - My guess that the newer box from the Russian manufacturer include the same sprues. The miniatures show their age a bit, details are a bit soft, mould lines and gaps between pieces are here. Nonetheless really a dynamic set - maybe too much - the officer is almost dancing, I bend is leg to get a more restrained stance. The poses evoke the propaganda posters. In the background an early ww2 infantryman , also from Zvezda, sneaked in the photo-call.
The sailor with the rifle and the lonely infantryman were painted 2 years ago I guess,  the rest between the last week and yesterday.
The M3 from New Ray was labelled 1/32 but is smaller so perfect for support my soviet forces. It's not a real kit, even if it requires mounting, it's a more a toy but cheap and easier to get on the table. Don't expect model kit quality but I'm sure that loading it with the crew stuff it will look better. NewRay's WW2
diecasts are recommended. 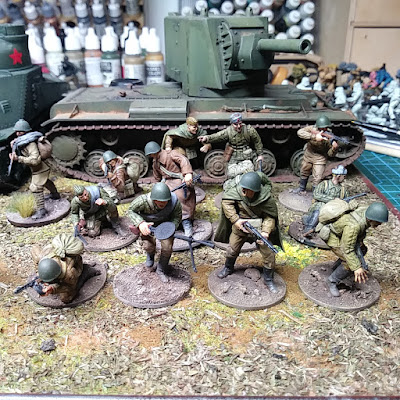 The Tamiya box is a steal (Russian army assault infantry) , if you're interested in 1/35 wargaming grab it !! It still can be found quite cheap and with 12 miniatures you have already a squad with some extras. They depict the late war soviet soldier but can be use I guess from 1942 onwards.  Clean casts, crisp details, really cool for dry-brushing and washes. A must.
The huge KV2 towering his comrades was originally bought with another beast almost 10 years ago maybe?  for a imperial wh 40k project but -ohhh surprise- ended shelved until I started with the 1/35 madness and remembered their existence. His brother will probably turn into a beautiful, tough, massive objective for the tabletop.
The miniatures were painted 2 years ago already.
All this stuff will featured in more detail in future posts.
More miniatures painted, more brush madness, more compulsive project really soon!!
Hasta luego, À tout de suite, See ya!
Publicado por a.beneitezalemany@gmail.com en 3/16/2021 02:31:00 a. m. 4 comentarios:

I can't believe but more than 3 years have passed since the last post, obviously too much time being silent for a blog and and a quite funny situation since I kept doing things in the hobby front. None of the 2018 goals have been met, none of them fully achieved of course, new items have joined the stash, aka "the pile of shame", new ideas have been flourishing.

But using a too often read sentence in the blogosphere "Real life as taken is toll" the painting mojo came and went, as the "real world" events were ongoing. In three years good news have hopefully succeed to sad ones and I hope that  despite the actual situation I will kept a regular posting in this blog, a chronicle of a my wargaming and painting journey, welcome again to "A wash a bourbon " where, I hope, in the midst of too many and never ending projects you will find something interesting and useful.

Hi everybody,
More than a week without giving some news, but hopefully the brushes weren't inactive mainly with the Great Northern War commission and the subject of today's post, some 1/72 Russian Civil War  bolshevik infantry bases.
Those were started and modified many moons ago (maybe two years) since, most of them were left barely primed in black until four days ago. All the miniatures were modified to get an approximation to a RCW look, so helmet were removed for example replaced by peaked and fur caps. This was done in hurry to try to have them ready for a game. The transformations were aimed to get the overall look and they aren't totally historical right (WW2 collars and some equipment left) Apologies.
The 1/72 amateurs have recognized already figures from Pegasus, Hat, Plastic Soldier Company, Esci/Italeri from their Russian WW2 miniatures sets

Two of them as test, to see how works the finished base decoration. I added the bayonets to the Mosin Nagant rifles, for me, the almost napoleonic pointy bit is definitively associate with the Russian soldier of the first half of the 20th ccntury and add something more to the RCW look that I was searching. I will probably reduced the number of different khaki colors used, in sake of painting speed and to give a more unified look to each unit despise the fact that the pictures show a motley look and huge variations in the clothes colors. 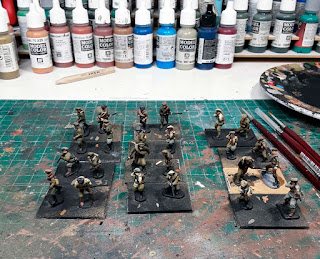 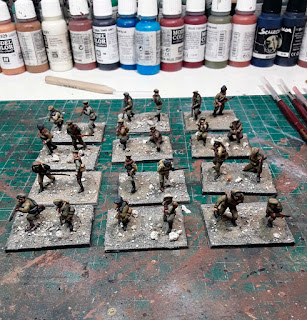 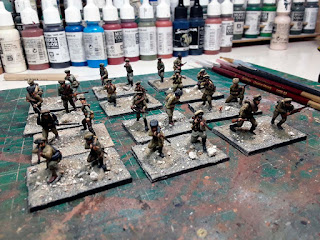 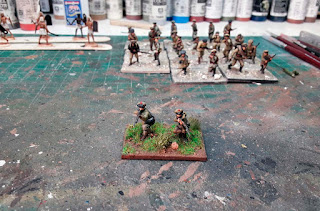 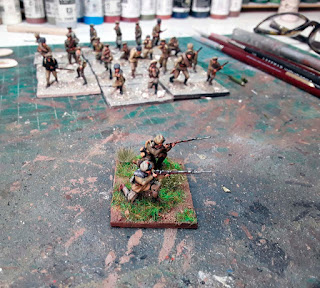 I wouldn't like to finish without mentioning Mr Mark Plant and his wonderful site on the RCW "Pygmy Wars" a mine informations and resources (be aware that some links related to the site don't work sadly) whatever Hat off Mark.
Publicado por a.beneitezalemany@gmail.com en 1/30/2018 02:35:00 p. m. 3 comentarios: